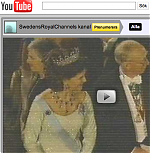 ”A King without E-mail. Reflections on New Media and the Royal Court”

In mid-June 1996, the Swedish royal court went virtual. Prior analogue information strategies had been deemed old fashioned, and it was time for something new – the Internet. … Soon the royal family was online with a dedicated homepage. Because of the great interest from English-speaking countries, half a year later the three sub-sites “The Monarchy in Sweden”, “The Royal Family” and “The Royal Palace” were also released in English versions at royalcourt.se. Of these, “The Royal Family” attracted most attention. Complete with colour portraits, the king, the queen and the crown princess were presented with biographical details. The entire Bernadotte Dynasty was even displayed in the form of a graphical family tree. However, visitors seeking to get in touch with the court must surely have been disappointed, as the site specifically stressed in bold letters: “We would like to point out that His Majesty the King of Sweden does not have an e-mail address.

Ingår i Media and Monarchy in Sweden