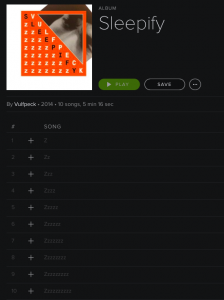 In March 2014 the funk band Vulfpeck released the conceptual album, “Sleepify”, containing five minutes and 16 seconds of pure silence. The purpose was to crowdfund an upcoming world tour, and songs were specifically prompted to be available on the Swedish music streaming service Spotify—hence the title of the album. In a video posted at the same time on YouTube, band leader Jack Stratton stated that when he had sat down with his band to talk about potential touring during the fall of 2014, “they said that they would do it under one condition: that all the shows would be free.” Jokingly, he replied: “That’s not a problem—Yeah!”